Reggie Hallett, founder and head chef, is a man with a mission: “I am a firm believer that you should be able to have the option of great food while enjoying friends at a great local bar”.  There’s plenty to suggest that he’s onto something: even on a Monday evening around 7, a time when most downtown institutions are sluggish at best. Reggie’s joint is usually JUMPING.

Let’s start with the location: 11 West Front. This is an intimate bar/restaurant which old timers will remember as Utopia, that was later renovated into a bar/restaurant called (wait for it): 11 West Front. I was never a frequent visitor to this later institution, but to my eyes, the current interior is largely unchanged, which is fine, because it’s tastefully done, and very pleasant.

The main dining room has a handsome, full bar, and half dozen tables. There’s also a garden in back which, during warmer weather, more than doubles the seating capacity, as well as an upstairs room that provides a quieter, more intimate dining space year-round.

We’ve sampled much of the bbq menu: the pork ribs (the header image shows a half rack, which is enough for 2 hungry people), beef brisket, and salmon. Several additional items, including whole or half chickens, chicken wings, and beef ribs are also offered, though we’ve yet to try them. 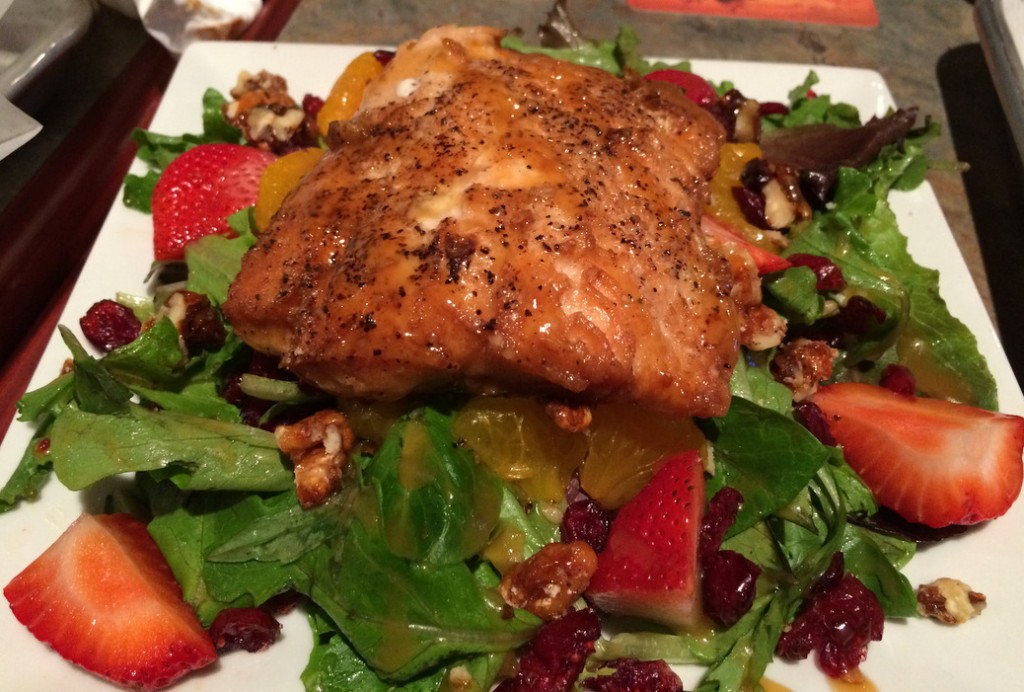 Obviously, any BBQ restaurant is mostly targeting meat eaters, but 1911 can satisfy pescetarians as well. The house-smoked Salmon in particular is well executed. It can be ordered by itself, with sides, or on top of either of the two salads on the menu. Ovo-lacto vegetarians are pretty much limited to the salads and a few sides: greens, mac & cheese, and potatoes. A few additional items listed on the website menu would be useful additions to a vegetarian meal (e.g. broccoli slaw), but didn’t appear on the paper menu in the restaurant when we showed up the other day.

The BBQ meats are very good, and you can choose from several highly flavored BBQ sauces on the table. The smoked meats don’t quite come up to the standards of Hambone Opera in the Trenton Farmer’s Market. But that misses the key point: Hambone is a take out joint in Ewing, that closes early and half the week. 1911 Smoke House BBQ is serving this stuff in a bar in DOWNTOWN Trenton, 6-7 days a week, some nights until 1:30 AM. It provides a fun, friendly, intimate dining environment and an oasis of good cheer in a downtown that needs it after hours.

Currently, the bar’s beer offerings are good, but somewhat limited. According to the bar manager, Jill, they’re planning to rotate the beers seasonally, and will be offering an exotic martini list (e.g. pecan pie martinis).

Extended Hours during NFL Season: The bar has a couple of HDTVs, and there’s a projection system in the garden. During the NFL season the bar provides extended hours on Sundays and Mondays: Sunday (normally closed), they’ll open for both the afternoon and evening games, starting at 1 PM to 1:30 AM or so. Mondays (when they normally close at 9 PM) they’ll stay open until the end of the Monday Night game (1:30-ish).

Service is uber-friendly and cares, though our server was still learning the menu when we visited a few days after opening. We expect that will settle down. Chef Reggie is omnipresent, and seems very good at listening to his customers.

If you’re looking for a good time downtown, with a lively crowd, there’s no better place.

Click for ALL reviews in these related categories:
Bars | BBQ | Restaurants