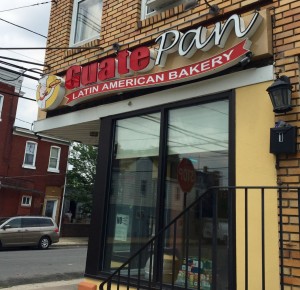 We have never been to Guatemala, though living in Trenton it often feels like Guatemela has come to us. After all, this city has the 6th largest Guatemalan population in the U.S., according to the most recent census. If you’re lucky enough to live in Trenton these days, you’re used to seeing Guatemalan bakeries, which have been popping up left and right. The most popular of them seem to be the Guate Pan chain, which opened in 2003 and now has three locations in or adjacent to the city (on Genesee Street, on Greenwood Ave, and on Hamilton Ave) as well as locations in Hightstown and Plainfield.

Guate Pan serves Guatemalan breads, croissants and muffins, and various sweets such as cakes, cupcakes, pastries, and more. The prices are incredibly reasonable, and the service is excellent. We had tried the bread at Guate Pan before, and hadn’t been blown away. Guatemalan baking is different than the European-influenced baking that we’ve come to expect in the United States. Some of the breads we sampled weren’t a match for our palate, and we found ourselves unable to judge their quality, being unfamiliar with the ideal they were aspiring to. But when a friend suggested that we re-visit them and sample their cakes and pastries, we decided to give it another go.

We have now sampled our way through a healthy assortment of Guate Pan’s pastry case, and we’re impressed by their sweets. The cupcakes were great, moist and tasty. We really enjoyed their “banana twist,” which is lemon curd on top of puff pastry, served with a caramelized banana on top. Their cream puffs were light and airy while still being decadent. We can’t recommend their croissants, which we feel lack the requisite flaky layers and buttery dissolving interiors.

Their tres leches deserves a special mention. Tres Leches is a Latin American cake soaked in three different milks: evaporated milk, sweetened condensed milk, and heavy cream. It is sorta the Latin American version of Tiramisu. The light and airy sponge of Guate Pan’s Tres Leches was the perfect texture to absorb the three milks. As a whole, the cake was exemplary, with a decadent and luscious frosting and a spongy center that was moist from the generous pour of milks that it had received. We’ll go there again just for the tres leches, which is comparable to that served at Mariachi Grill in Ewing.

If you’re looking for somewhere to pick up a cake or some sweets while you’re in Trenton, we recommend Guate Pan.

Please note that this review has the address of Guate Pan on Genesee and Beatty street.  The other Trenton area addresses are:

(Thanks to Hidden Trenton friend Andrew for the suggestion to revisit and try the cakes!)

Click for ALL reviews in these related categories:
Baked Goods | Shopping