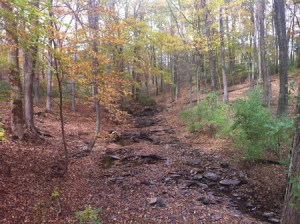 h of Mercer-Hunterdon County line is the Dry Run Creek trailhead, a compact little parking lot on Woodens Lane, a lovely rural enclave in West Amwell, just SE of Lambertville, and 20 minutes or so north of downtown Trenton by car.  Maintained by the D&R Greenway Land Trust, it’s a delightful, 1.2 mile trail that descends into Dry Run Creek* and then climbs about 230 feet to 518 and another parking lot.  There, if you look directly across the road, you’ll see a blue blaze on a tree.  Cross the road, and follow the fence-line: you’ll find yourself on another trail, this one sporting square blue blazes, which traverses a combination of open space recently acquired by the Town of Amwell and state forest (which surrounds Lamberton’s reservoir).  Known as the RockHopper Trail, it adds at least another 1.8 miles through the woods**

The RockHopper Trail gets its name from the boulder field through which the trail winds for much of its middle section.  Composed of blue gray diabase, also known as “trap rock”, it was used commercially for many purposes including railroad ballast, concrete aggregate, and gravel road beds.  This section of Mercer/Huntington county is famous for it (the western end of Baldpate Mountain is still a commercial quarry).  It was created by volcanic activity during the triassic era:  magma intruded into the original sedimentary rock and cooled in underground pools.  Over the eons, the soft sedimentary rock eroded away, exposing the diabase boulders.

There’s nothing particularly difficult about any of this walk.  The Dry Run Creek segment is a bit hillier, but is still a very moderate grade.  The RockHopper isn’t completely flat, but undulates more than climbs.  It actually wraps around the Swan Creek reservoir, which provides Lambertville with its public water supply, but at least when the leaves are out, you can’t see it from the trail.  Bushwhacking into the reservoir area might be fun (you traverse plenty of old woods roads that seem likely to lead you there), though I haven’t tried it and suspect you’ll run into a fence or no trespassing signs at some point. 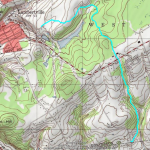 Click on the thumbnail to get a full sized image of the track overlaid on a USGS topo map.

A word of caution:  the RockHopper trail is well marked by blue blazes, but it does shift between newly blazed trails and older woods roads.  It’s easy to miss the blazes when the trail shifts off the old roads onto the new path (I did it three times in the course of my hike).  It’s no big deal: if you’re walking on a woods road and realize you haven’t seen a blaze in a while, you may have unwittingly left the trail.  In those cases, keep looking for blue blazes for another minute or so, and if you don’t see one, double back until you find one.  Usually you’ll discover you missed a turnoff.  An inexperienced hiker could panic, so just a word to the wise.

Why walk this trail?  The nearby Baldpate Mountain has more trails, and generally more varied and challenging terrain.  So if you’re not familiar with that park, you might start there.  If you’re looking for a longer walk on moderate terrain, this is one of the best walks in the area.  There just aren’t many places you can walk over 6 miles (round trip) so close to Trenton.  These trails are also likely to deliver a degree of solitude that you won’t find elsewhere: very few people seem to use these trails, whereas you’ll often run into other people on Baldpate, the Sourlands, or Clayton Park – the other places with long walks – especially on weekends.

*Run is an archaic English synonym for Creek, so this name is somewhat comic.  No doubt it was originally named Dry Run, and morphed into Dry Run Creek as later generations unfamiliar with the meaning of “run” added the redundant “creek”.

**There is almost no information about the RockHopper Trail on the Internet, other than this article.  Even the reasonably comprehensive NJTrails website mentions it, but doesn’t provide a “trail guide” or map.  According to one mention I found, the trail is supposed to be 3.6 miles.  I suspect that’s round-trip, as my recent exploration found 1.8 miles of trail through the woods, though it’s possible the trail continues down some town roads and reenters the woods further on.