Rho is successor to the now (and thankfully) defunct KatManDu Nightclub.  Located in the historic factory building which used to house the Trenton Iron Works, the inventors of the structural-I-beam, the restaurant is blessed with an engaging space, and spectacular river views right on the banks of the Delaware, a few hundred yards north of Waterfront Park (where the Yankees AA farm team plays baseball). 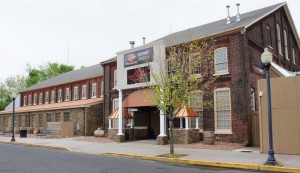 We write this review a few days after Rho opened its doors for the first time.  As such, it may be premature, but we’re excited about it’s potential and want to see it succeed.

Rho describes itself as “upscale casual dining with an Italian theme”.  Gone is KatManDu’s tiki bar (didn’t the original owners know Kathmandu is located in Nepal, not a tropical island?), replaced with a much more salubrious “upscale Italian theme”.

The menu is limited, but well executed.  It doesn’t reach the gastronomic heights of Settimo Cielo, but it’s significantly cheaper and better than good.  Lunch features individual “gourmet” pizzas, salads, pasta, sandwiches, and pannini.  Dinner keeps most of the lunch menu, adds some appetizers, and a dozen or so dinner entrees such as chicken Marsala.  Prices target a “mid-level” with Pastas priced at $14-18, and dinner entrees at $16-24 (though, no doubt, prices will increase as the restaurant becomes more established).  Panini and salads are about $9.  Portions are ample.

In the picture you see a typical lunch sandwich (their meatball on Cibatta), which comes with a choice of salad or zucchini fries for $9.  The meatballs were a tasty mix of beef, pork, and veal; it came on a nice bed of broccoli rabe.  Dinner entrees are equally good. 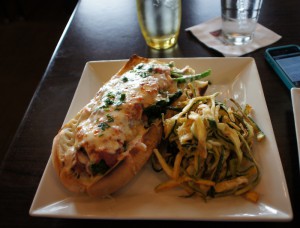 There’s a full bar and a wine list: you can get a decent bottle for under $30, which makes it a relative “bargain” in today’s restaurant market.

Executive chef Luis Martinez was formerly the chef at Teresa’s Cafe, which was one of the few downtown Princeton restaurants I used to enjoy.  If you know that restaurant, then you’ve got a pretty good idea what Rho’s food is like.  Rho’s owner is Marc Gelman, who has owned Pennsauken’s “The Pub” steakhouse since 1999.  It’s an experienced team, which gives Rho a better than typical chance for a restaurant startup.  The second time I showed up at Rho, it was a surprisingly busy lunch hour and Marc was running around delivering food to tables.  It speaks well for his “hands on” management style.

The restaurant also plans to stay open late.  The full menu is served until 10 PM Tu-Th, 11 PM F-S, and 9 PM on Su.  There’s a late night menu (appetizers and individual pizzas) that is served later.

For me, I wonder how the restaurant will fare in combination with the night club.  KatManDu used to draw the disco clientele: eg, women in high, high heels, short, short skirts, and way too much makeup.  Rho attracted a big crowd at its official opening by promoting Melissa Gorga as Mistress of Ceremonies (I confess I had to look it up: Melissa is star of the Real Housewives of NJ reality TV show and is perhaps the iconic “Guidette”).

That risk aside, we’re hopeful that Rho will turn out to be a solid addition to Trenton’s restaurant scene.

One thought on “I-Rho-n Works”