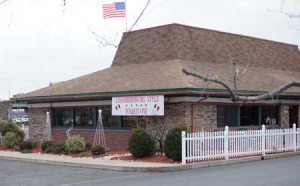 La Villa is a nondescript Italian restaurant in Morrisville, over the Trenton Makes bridge,  located in what appears to be a converted Pizza Hut outlet.  In addition to regular pizza and a host of conventional Italian fare, La Villa features a “Chambersburg Style Tomato Pie”.  And darned if it isn’t: La Villa was selected as the overall winner in our 2015-16 Tomato Pie competition (click on the “Overall Winner” banner to read more). With the “iconic restaurants” like DeLorenzo’s Tomato Pie and Papas both having moved to Robbinsville, La Villa, which is an easy bike ride from downtown (or a long walk), was judged to make the best Tomato Pie within a 10 minute car drive from city hall. Frankly, La Villa’s tomato pie, while quite different from those two places, makes a pie that you can enjoy fully as much.

La Villa produces a tomato pie that’s definitely on the thin side:  thinner than Papa’s, which is one iconic standard.  The crust delivers a subtle crispness, which holds up through an entire meal.  I’m told that the crust stands up well to being taken out, without getting soggy, though I’ve not tested this myself. I’m a strong believer that tomato pie should be consumed straight out of the oven.

There’s no tomato sauce, just pieces of diced, tomatoes. While the tomato is probably from a can, it has a satisfyingly intense flavor, and unlike many tomato pie recipes, it’s lightly seasoned with garlic and oregano. We think it’s an improvement.  The cheese is better than average as well. Toppings, such as the sausage and mushrooms, are fresh and high quality.  Breaking with tradition, the pie generally comes in rectangular form, and is bigger than a conventional large, round pie.

La Villa’s owner and head chef, Gino Lenti, moved to PA from Calabria in 1981.  He worked in family restaurants in Philly and elsewhere until starting La Villa in 1999.

La Villa also has a full restaurant menu in addition to tomato pie, and while there’s a lot I haven’t sampled, what I have tried has been extremely good.  The eggplant parm is “to die for”, with thin-sliced eggplant pan-fried in olive oil and then baked.  La Villa’s marinara sauce may be the best in the area, which is saying a lot.

BYOB and friendly servers.  The owner, Gino Lenti, is always there and seems genuinely interested in the opinions of his customers.

Thanks to Phil D. for suggesting this place.