The “State Street Project” is the umbrella name for the programs at Passage Theatre that work with inner-city Trenton youth. It’s a huge part of what Passage does, much of it behind the scenes. When they mount a public production, RUN, don’t walk to your phone and reserve seats (they’re always inexpensive, and often free). Everything they do is worth seeing by kids and adults alike.

Shows are mounted 3-4 times per year (check the website for dates, times, and venues). 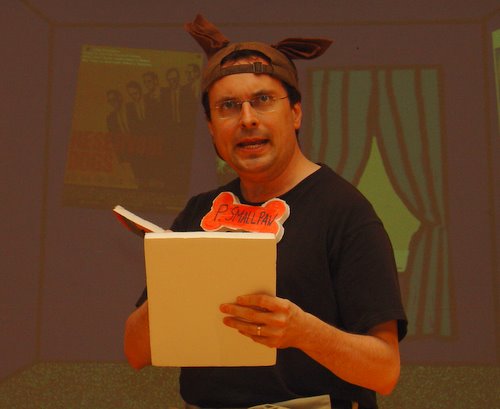 The photograph above (of David White, Education Director of Passage Theatre, performing in a State Street production) is taken from my personal favorite, called “Playmaking”. Passage usually produces at least one Playmaking event every year.

In Playmaking, the Trenton kids (as young as 8 ) take a series of 8 workshops on how to write a play. If they complete that work, they’re invited to a weekend retreat in the country. Paired with an adult mentor (typically a working, professional playwrite), the kids then write a 5-minute, 2-character play over the weekend. A couple of weeks later they’re produced on stage with ADULT professional actors and directors.
The kids’ sensibilities and world-views result in wild, wacky, and utterly original scripts that the professional actors render on stage in a form that enthralls kids and adults equally. You will find yourself howling with laughter at one moment, then brought up short by a searing insight into the lives of the inner-city authors.

What makes the whole experience even more delicious is that the playwrite is sitting on the side of the stage. You can watch him or her watching his own production.

Click for ALL reviews in these related categories:
Arts & Entertainment | Kids | Theater