Captain Paul’s proves that inventive entrepreneurs can make a go of even unlikely business concepts.

Take the hot dog. Many spurn it as an overly processed, heavily salted, highly fatted anachronism. American cuisine at its worst. One of the culprits (though perhaps not the primary one) in a cuisine that has achieved the highest rate of obesity in the world. And they (the many) would be right.

But then Paul Terry, a retired fireman, has a better idea. Let’s create a restaurant dedicated to serving hot dogs. For example, take the hot dog in the header image. It’s deep fried (though you can specify a boiled dog if you remember to). Then stuff it into a roll with cheez whiz (the ultimate American processed cheese product), a slice of bacon, and chili. This is only one of a dozen or so variations. While we’re at it, we’ll offer french fried potatoes (regular or sweet potato fries) and sandwiches (based on pork roll, fried chicken tenders, sausages, or pulled pork).

If our patrons are still hungry, we’ll tempt them with home made ice creams and water ice (plus soft serve), a full menu of cups, cones, sundaes and milk shakes, 24 different toppings, plus home made novelties like frozen cheese cake on a stick. 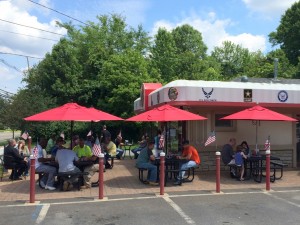 We’ll serve it all from a tiny little restaurant (with 6 stools at a counter) to keep our overhead down. But during the spring, summer, and early fall, we’ll let people eat at picnic tables in front of the restaurant. When the weather’s nice, patrons will be lined up out the door.

Frankly (if you’ll accept the pun), there’s nothing very special about the components of a Captain Paul’s hot dog: the meat isn’t noticeably different from any other hot dog you’ve ever had (and if you buy premium hot dogs at Whole Foods, or even Nathans, you’ll think it worse). Cheez whiz is cheez whiz. The bun is a WonderBread equivalent. But the whole is delivered with such verve that somehow it works. It’s FUN! And the fries are good. I mean, really good. I meant to leave some. I couldn’t. And the portion in the picture is the “small”. I ate them up, every last one, and was hungry for more.

Visit at your own risk.

Click for ALL reviews in these related categories:
Fast Food | Restaurants