It’s only a thirty minute drive from Trenton to this tiny vegetarian restaurant in Bucks County, PA. The decor is unimpressive, but the place is packed (on a recent Saturday we were unable to get a reservation until 8:45pm). Why? This joint has some of the best vegetarian food in the greater Philadelphia and Trenton areas. This is hearty, rib-sticking vegetarian cuisine, and it’s absolutely worth the trip. 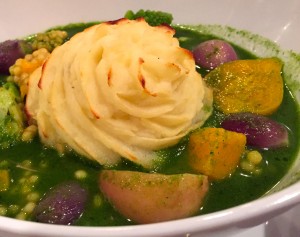 Bring an appetite, because the portions are enormous. We brought three very hungry adults for our late night dinner, and after two hearty (and delicious) appetizers, we barely had room for our three entrees. The two standout dishes were so exquisite that the restaurant immediately became a favorite of ours. We recommend the taco verduras (blue corn cakes with pumpkin seed crusted tofu, pickle pepper remoulade, mashed avocado and pickled red onions) and the improbably named “chicken and waffles” (parmesan herb waffle topped with a savory mix of mushrooms roasted in a carrot jus, and served with fennel butter and black mission fig maple syrup).  The arancini (balls of almond crusted green apple pumpkin risotto fritters) were delightful at first bite, though they grew slightly tiresome by the time we finished the giant spheres. The shepherd’s pie (with a green curry coconut poblano broth) was both unusual and savory—we’re not sure we would have called it a “shepherd’s pie,” but we would certainly order it again.  Blue Sage’s take on khorma (a South Asian delight) was the evening’s sole disappointment; though we loved the tandoori cauliflower that garnished the bowl, the vegetable-filled stew didn’t reach the culinary heights of the rest of the dishes. The menu features a world cuisine, and though it leans heavily toward Latin America (with several taco dishes), it spans a wide range from Chinese steamed buns to middle-Eastern inspired falafel wraps. 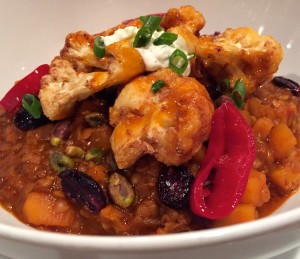 Vegans will find a few items that are dairy free (they are well-marked in the menu), and a variety of dishes that can be made without dairy upon request.  Omnivores will be fine; if they crave something familiar, they can order the restaurant’s classic sliders, or the giant plate of vegetarian goat cheese nachos (we didn’t try them, but they looked great).

The terrific artistic plating of each dish more than makes up for the humble decor of this restaurant, set in a strip mall on a bleak suburban-sprawl road.  In fact, this food is so good that you’ll soon forget about the other patrons who are crowded in alongside you, only noticing them when yet another masterpiece arrives on their table from the kitchen.  You’ll want to order absolutely everything you see.

Blue Sage is BYOB.  Appetizers, salads and sandwiches run $10-12, with wraps coming in at $17.95 and entrees around $20. Fortunately, the portions are enormous, so it ends up being a better bargain than similar vegetarian joints (such as New Hope’s Sprig & Vine, or Philadelphia’s Vedge). No matter how tempted you may be, plan on ordering only one main dish (and maybe splitting an appetizer with friends)—even so you’ll likely have leftovers to bring home.

The one thing that’s essential?  Make a reservation in advance!  This restaurant has become a destination for the greater Philadelphia area, and for good reason.

Click for ALL reviews in these related categories:
Restaurants | World Cuisine