Updated August 2015 According to Ed Levine, author of Pizza, a Slice of Heaven, two of the first three pizza parlors founded in the entire U.S. of A. were located in Trenton. Of these two Trenton establishments, one is still around: Papas, founded in 1912 by the grandfather of the current operator (Nick). The oldest, by the way, was a restaurant in NYC which recently changed hands out of the founding family.  That makes Papa’s the oldest pizza restaurant in the United States under continuous management by the same family.

Unfortunately for us Trentonians, in the Summer of 2013, Papa’s moved about 8 miles down the road from its previous Chambersburg location (its home since 1945) to its new home in Robbinsville. In the new location, family participation has shrunk: Abie is now retired. He was Nick’s father who ran the Chambersburg restaurant on Sundays when I first started going to Papas about a dozen years ago. Dom, Nick’s son, used to do all of the prep cooking for Chambersburg, and is now out on his own (Papa’s Tomato Pie of Trenton).

Papa’s makes a proper Trenton tomato pie (it should, it virtually invented it. Er, well, it actually copied it from Joe’s, which started in 1910, after Papa left that establishment to go into business for himself). A proper Trenton tomato pie has olive oil drizzled over a thin crust, then a layer of cheese, then a layer of crushed tomatoes (no sauce), and then a last drizzle of olive oil. Only fresh ingredients are allowed. 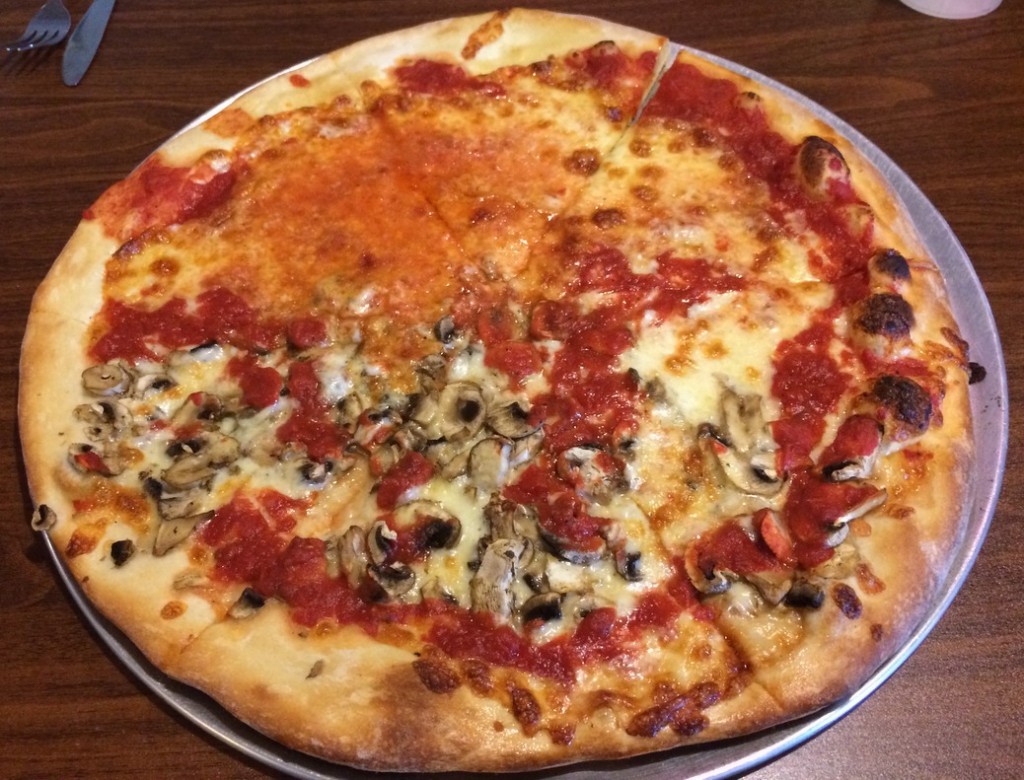 We are concerned that Papa’s quality is slipping in the new location, without the support of the full family. To see why, check out the photo of a pie we were served in August of 2015, when we re-visited the restaurant (click to enlarge). The pie (small, half mushroom) had a pool of cheese and excess oil which you can see as a light orange area on the top of the pie, just left of center in the image. Underneath this pool, the crust was a complete, soggy mess. Not like a tomato pie at all; more like Famous Ray’s from NYC. It’s roughly 25% of the pie. The rest was very good, superb even. But when you go to the oldest tomato pie joint in the country, you expect better.

Compared to Chambersburg, the new location is bigger, has longer hours, and a large parking lot. The fake Tiffany lamp shades have moved over, and the new space is comfortable without being fancy. The menu is slightly expanded with sandwiches and soups, and prices are up a bit. The same music can be heard in the background…  if you’re lucky the Louis Prima CD will be playing; if you’re particularly unlucky (as I was recently), you’ll have to listen to Rod Stewart butcher the Great American Songbook.

With Dom out on his own, it does raise the question of where you should go to get a real “Papa’s Tomato Pie”. It’s a tough call. The style of the pies, and the ingredients, seem virtually identical (which is no surprise).

The Robbinsville location is a minor haul from Trenton (like 16 minutes from City Hall) and even further from the west side or northern/western suburbs of Trenton. But it is a much nicer location to dine in, and that’s important because tomato pie should always be eaten as soon as it’s baked, and NEVER taken out.

If you go to Dom’s place, you’re going to be eating in a Risoldi’s supermarket. On the other hand, every time I’ve eaten there, Dom has made the pie and served it personally. In Robbinsville, you’re going to get a pie made by a hired hand (Nick has always been a “front of house” guy). I know whom I would expect to consistently make a better pie.

Either way, enjoy the experience! You’ll be eating not only a great tomato pie, but a slice of Trenton (and American) history.