Special notes for parents
This park is surprisingly close via high speed roads, only 45 minutes away. It’s a lovely hike in its own right, irrespective of the history. You can do many variations, taking advantage of the flat Valley Creek path as an alternate to either ridge. It’s close enough that you might want to expose the kids to the visitor center exhibits and the “history” in small doses, as part of a series of outings centered on hiking.

How do you feel about a 4 mile loop hike on one of the country’s most hallowed historic sites, just 45 minutes from town?

Trenton is at the center of much Revolutionary War history.  The two battles of Trenton took place within a week of each other, around New Year of 1777, and were the first American victories against Hessian and British regulars.*

The following year, the Continental Army was driven out of NJ, and ended up spending the winter of 1777-8 in Valley Forge, only about 40 miles west of Trenton.  Today it’s connected by high speed roads (Rt. 1 and the PA Turnpike), so it takes only about 45 minutes to drive there, even if you more or less observe the speed limits.

Valley Forge is located where Valley Creek hits the Schuylkill River, which then flows into the Delaware at Philly.  High quality water was a prerequisite for siting a long-term army camp, and it’s no accident that the stream which run through Valley Forge is among the few in the area still supporting wild trout (more later).  The stream bed of Valley Creek is limestone, and the water is usually crystal clear. 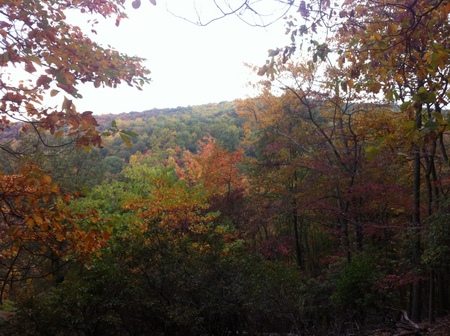 Valley Creek runs through a fairly steep valley.  “Mt. Misery” is the taller bank, on the western side of the Creek. “Mt. Joy” is on the eastern bank.  “Mountain” is relative, they’re really hills providing a few hundred feet of elevation gain.  My favorite thing to do in the park (other than fishing) is a loop hike which is about 4 miles and cumulatively 750 vertical feet of elevation gain.  We recommend (and provide directions) for the hike in a counter-clockwise direction, starting where Valley Creek meets the Schuylkill, south over Mt. Misery, crossing Valley Creek, and back over Mt. Joy.  There are also shorter variations on the Mt. Misery side that are worth walking if you have less time or want less elevation change.

(Click here for a trail map and hiking notes) 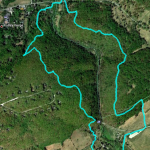 Slopes are moderate, and footing is generally pretty easy.  Highly fit beginners will find they can complete this hike without too much difficulty, though we rate it Intermediate to Experienced given the cumulative elevation gain for the full hike.  Beginners who want to avoid the elevation gain, can simply walk along Valley Creek.

Whatever route you select, the extra “juice” from the historical significance of the site, and the beauty of the location, makes it something that anyone who lives in Trenton, and loves to walk, should do at least once.  Kids are likely to enjoy walking through the ruins of an old mill (on the Mt. Misery side).  There’s also an old fashioned covered bridge over Valley Creek which is just off the trail, and reconstructed huts similar to winter sleeping quarters for Washington’s troops.

As I mentioned, Valley Creek is today a wild trout stream, and you can fish it anywhere in the park if you have a PA fishing license.  The stream hasn’t been stocked since the 1960s, when PCB pollution was discovered in the stream (from a transformer factory upstream) and it was realized that eating these fish was hazardous to human health.  It’s been managed as a wild trout fishery since then, catch and release only.  These are smart, wary wild brown trout.  Being the closest trout stream to Philly (less than 30 minutes from downtown), it gets a fair amount of pressure, but it’s absolutely lovely.
_____________
*The battles of Trenton were a critical turning point in the war, as news of the victories convinced the French to join us in the war.  The British were driven back to New Brunswick, sheltered by the guns of the Royal Navy, and the American Army wintered at Jockey Hollow, near Morristown.