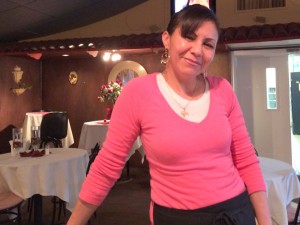 What makes it all a little incongruous is that the restaurant itself is cavernous: it looks like a 1970’s catering hall that should be serving wedding parties of 250 instead of a handful of customers at a time. And Casa Lupita does do a significant business with private parties that take over the place, typically on the weekends from 6 PM to Midnight.

But show up on a typical weekday for lunch, and you may have the restaurant to yourself. Which is OK, because that means you can hang out with Alicia when she’s not too busy cooking your meal.

When I first visited Casa Lupita, I was a little put off by the chips, which are obviously from a bag.

On the other hand, the dipping sauces come to the table warm and delicious, and are obviously home made: an excellent salsa verdes (green sauce) that’s flavorful without being terribly hot, and a spicy red, Chile Morita.  This is new to me, but it’s a dark red sauce made from ripe (red) jalapenos chiles, which are charred on the grill before being pulverized for the sauce.  It gives it a smoky flavor similar to a chipotle sauce.  Alicia will also serve a third homemade sauce called Chile de Arbol, which has a salty, earthy flavor.  They are some of the best salsas of any restaurant in Trenton, which is saying a lot.  Since I love spice, and tend to slather my food with salsa, it’s also a huge plus for me.  And I forgive Alicia serving chips out of a bag: she’s just too busy to make them fresh for everyone who comes in off the street. 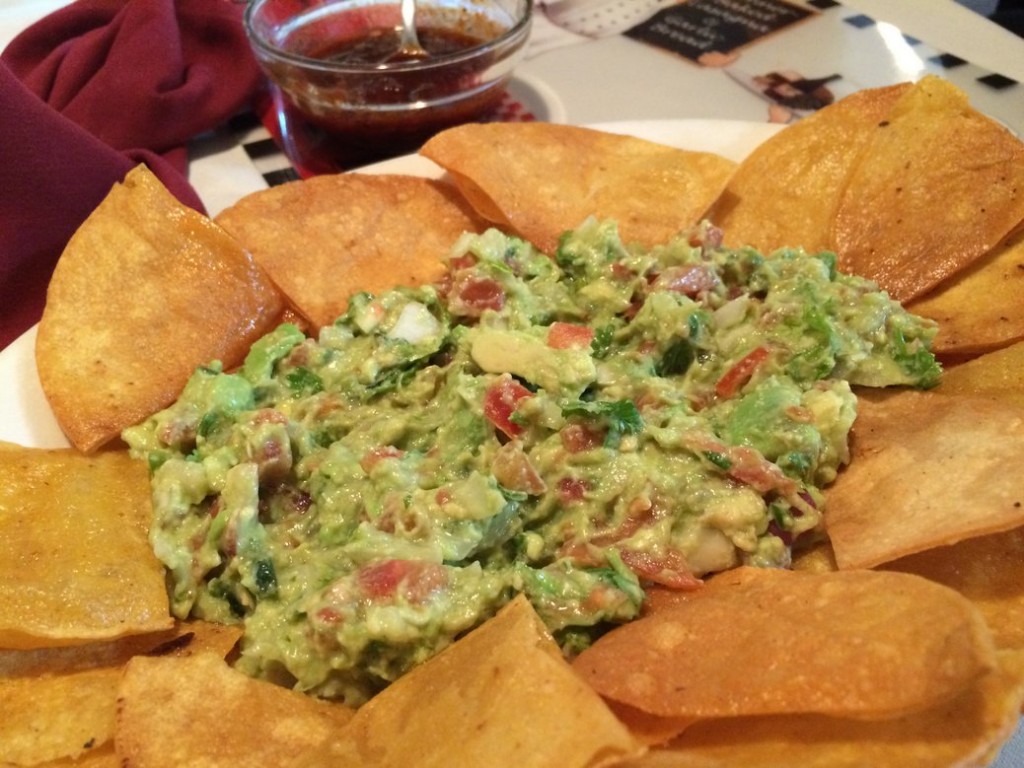 But order the guacamole, and you do get homemade chips!  And what guac!  I think our order was made in real time, out of a freshly mashed avocado, onions, cilantro, lemon juice, and spices.  Truly superb, and beautifully presented on the plate.

I’ve now sampled three dishes at Casa Lupita, and am looking forward to sampling more.  Two were superb, one was OK.

Check out these chicken fajitas (header image)!  The chicken was delicately marinated, giving it a wonderful tang.  It was tender and served with avocado and a mixture of carmelized onions, red and green bell peppers, and jalapenos (Alicia will ask whether you want the mixture hot or mild or somewhere in between).  The beans are superb.

Her Sopes are fantastic as well.  The masa pancake base was crisp on one side and tender on the other.  The chicken had a delicate flavor of its own (different from the fajitas), and the bean mixture contributed to the mix of flavors.  Even the tomato had some flavor, which is saying something for an inexpensive NJ restaurant in March.  In sum, these Sopes are as good as any in town.

My only disappointment has been the enchiladas mole.  Not that they were bad, but I don’t think the mole sauce was home-made.  It’s certainly not as subtle or complex as the best mole sauces in town.

Still, we’re excited about Casa Lupita.  We’ve started it at 3-hearts gravitas.  But kind of like Alice’s Restaurant when it first hit the charts, we’ll mark it with a bullet, in that we expect it to rise in the charts.  In the meantime, we strongly recommend checking it out and letting us know what you think.

Mountain out of a Mole de Pollo

2 thoughts on “At Alicia’s Restaurant”