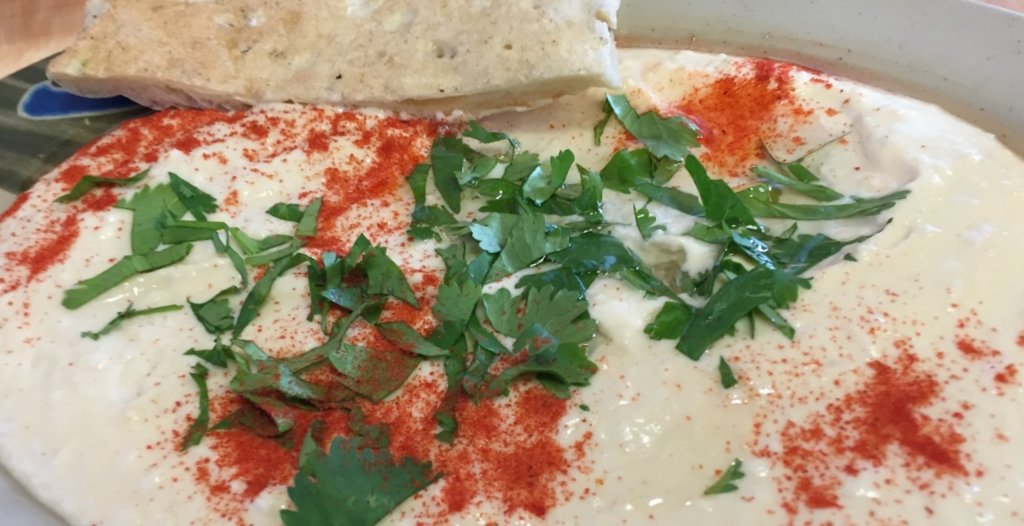 I was taking an Uber ride home from the Trenton Train Station with a very sweet driver who said he was originally from Pakistan. I asked if he had tried Shan’s Restaurant in Trenton, and he said it was a favorite. But had I tried Afghan Kabob and Grill, he asked? And with that, I knew I had a tasty trip ahead. 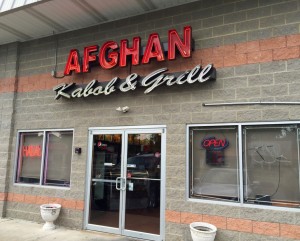 The next week, I ventured out to Afghan Kabob and Grill, which is on Route 33 (Greenwood Avenue) in Hamilton.  It is about 15 minutes from Trenton. The decor is a step up from a pizza parlor–booths and tables with decent lighting, some amount of wall decor, and an open kitchen/grill with a truly hideous, illuminated-sign-covered grill hood that occupies one entire side of the room. It’s too bad, because without that massive and classless bit of decoration, it might be quite charming.

But here, it’s all about the food. Their menu has kabobs, gyros and falafel, samosa and hummus, Afghan, Pakistani and Indian curries, sandwiches (as diverse as falafel wraps, Afghan chicken cheese burgers, and Philly cheese steaks), and some standard American fried foods (hot wings, chicken tenders, etc). We carefully selected our options to give us a taste of the diversity of the menu, and we approached the counter. “We’d like to start with an order of the samosa chaat” we said, imagining a delicious vegetarian samosa, coated with green and sweet chutneys. “Sorry, we’re out of that” we heard.  Hmmm, okay–well we had also picked out an Afghan appetizer, so we asked “Well how about the Bolani Kachalou?”   “Nope, we don’t have that either.”  So we resigned ourselves to the hummus and the cholay (a chickpea dish). My friend then went to order the chicken rashida (guess what, they didn’t have it either) and so he settled for the Chicken Tikka Masala. I asked what their favorite vegetarian entree was, and they guided me to the Sabzi (spinach). I’m sure if I’d ordered either of the two eggplant dishes (Bolani Banjan or Lagatak Banjan), I would have found them out of those as well! Not an auspicious start to our dining adventure.

But then the food started to arrive at our table. First up was the hummus, and it may be the best hummus I’ve had in the region. Ultra creamy and smooth, with a perfect balance of lemon and a strong,  tongue-coating tahini flavor. A slight hint of roasted garlic and paprika rounded out the aroma, and the sensuous and luscious mouth-feel paired perfectly with the warm pita that accompanied it. A few leaves of cilantro brightened the dish, highlighting the acidic notes of the lemon. This was the quintessence of hummus, the epitome of the chickpea spread. I was hooked.

The rest of our meal was lovely, but didn’t live up to the hummus’ high standard. Our entrees arrived with a small but uninspiring salad, with a tangy cilantro dressing and yogurt mint chutney on the side.  The Sabzi (spinach) was piquant and stimulating, and the Cholay (chickpeas) were well-seasoned and flavorful. Only the Chicken Tikka Masala disappointed, with good spices and seasoning but a slightly dry meat. All three were served with a spectacular Afghan-style naan (drier than its Indian cousin), which arrived still warm and pliable. Eat it quickly, before it stiffens. The generous portions of curry were served with a heaping plate of aromatic and spice-infused rice pilaf, made with nutty long grain rice and raisins.

We ended up ordering enough food for a family of four, and our bill was only $30, which was a very good deal. At the time of this review (2015), it would be easy for a single person to get a filling meal there for $10 or less. The guys behind the counter were jovial and funny, even as they were unable to provide most of the things we ordered off the menu. Vegetarians and vegans will find much that they can eat, as will those who are on gluten-free diets.

We’ll likely revisit Afghan Kabob and Grill and try the falafel, which seems like it may be worth experiencing. We were too stuffed after this visit to even imagine taking another bite. The hummus alone was worthy of five hearts, but a restaurant that is unable to serve most of its menu (or at least the items we happened to order!) is problematic. If you’re an omnivore, maybe it would be best to place your order in conversation with the guys, rather than perusing the menu only to be disappointed.

If you want great Afghan food, Afghan Kabob and Grill compares about evenly with Jahan’s, though Jahan’s is considerably closer to Trenton. You can get better Pakistani and Indian curries at Shan’s, though you’ll want to take a shower after your visit to clean yourself from that dive’s ubiquitous chicken-frying grease. If you are interested in terrific North Indian cuisine, there are great local options for vegetarians and omnivores alike–and with nicer decor.  But if you’re looking for a taste of everything, plus hummus so good it’ll make you want to bathe in it, you should definitely give Afghan Kabob and Grill a try!

Order the hummus. Think of the menu as a hypothetical.

Click for ALL reviews in these related categories:
Burgers/Sandwiches | Indian | Middle Eastern/Greek | Restaurants