Some of the hikes shown in this guide are found in the “Piedmont” and “Highlands” regions of northern NJ.   Based on years of experience of driving to these areas, we’ve figured out the best way to access them from the Trenton area, routes that can save you 15-20 minutes compared to the way that your GPS might guide you.

From Trenton, there are basically 3 key north/south routes to these regions (from West to East):

Scroll down below the map to get tips for each corridor. 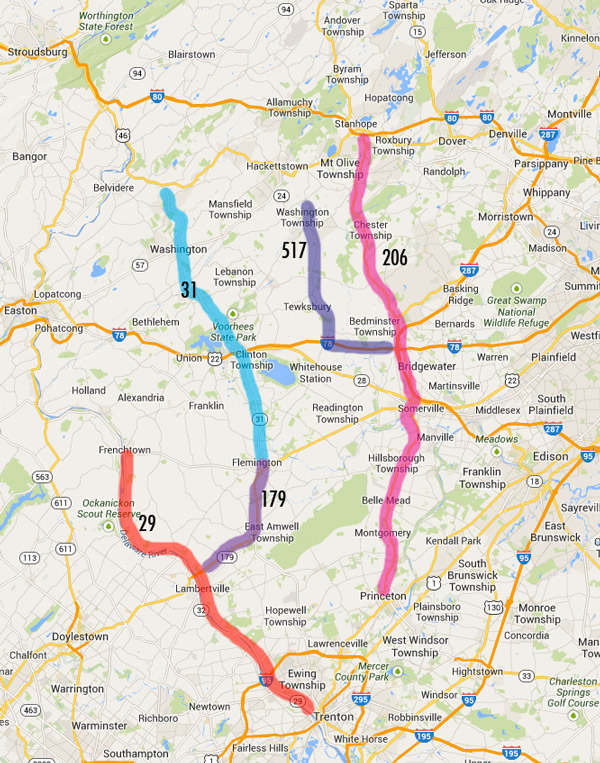 Route 29 is one of my favorite roads in NJ.  Besides being beautiful, it has very few traffic lights, and experiences little traffic even at peak rush hour.  Use it in preference to other routes whenever it makes sense.

Route 31 the key route from Trenton for most of the NJ uplands.  South of Flemington it is heavily congested with lots of traffic lights and very slow.  While in theory you can pick up 31 at the Trenton War Memorial and head north, in practice you’ll add at least 20 minutes to the drive.  Instead, take 29 to Lambertville, and continue straight onto 179 (purple).  While it appears much longer on the map than other routes, it has many fewer lights, is much faster, and is much less stressful.

206 is the gateway to the eastern uplands.  While heavily traveled, computer controlled traffic lights make it relatively quick during off-peak hours.  During rush-hour, however, it is extremely slow along its entire route.  You can also run into traffic during Christmas shopping season, and even on Sundays during “leaf season”.  If you need to return during rush hour, and have a choice between 206 or 31, pick 31.  You may even want to head west specifically to avoid 206 at rush hour.  That’s best accomplished via county roads, or on I-78.

While in theory you can pick up 206 N in downtown Trenton, the stretch from Trenton to Princeton is especially slow.  You’re better off taking Rt. 1 to Quaker Road to 206.  In Princeton, you can avoid additional traffic by paralleling 206 along the Elm Road (which turns in the Great Road, or CR 518) as far as Montgomery.  As you head north on 206 above the Somerville Circle, you want to get onto I-287 N for 2 exits, before exiting again for 206N towards Chester/Netcong.  A useful alternative to 206 to places like Long Valley is CR 517, which you can access from I-78.

One thought on “Driving to Northern NJ”