The Laurie Chauncey Trail (“LCT”) is a gorgeous, 2 mile loop around the fringes of the ETS Campus, named after the beloved second wife of ETS founder Henry Chauncey.    It stands next to the Ettl Farm Trail (“EFT”), a second loop, which adds some scenic variations and another mile or so of hiking.  Both trails track along Stony Brook, a fairly considerable stream that drains much of Hopewell Township and Princeton before joining up with the Millstone in West Windsor.  From there it flows into the Raritan and then into the sea near Perth Amboy.

We’ve rated this trail as suitable for beginners.  Footing is generally good, it’s very well marked, and elevation gain is minimal.  However, it’s not boringly flat either: sections of the hike undulate pleasantly, and you do need to be careful not to trip over the odd root sticking out of the ground.

While there are several parking options available (see trail map), we’ve selected one of the more remote locations on the eastern end of the loop, where Province Line Rd dead-ends due to a permanent bridge closure.  From there, it’s easy to combine LCT with the Ettl Farm Trail that also winds along Stony Brook.  To find the LCT trailhead, just walk back up Province Line Road about 75 yards from the barriers.

This location gives you multiple options.  One is to walk the LCT as a full loop by itself.  If you’ve never seen the ETS campus, it’s worth doing, as the trail cuts through the back parking-lot of the facility (and gives you glimpses of the front facade of the main complex through the trees at several points). 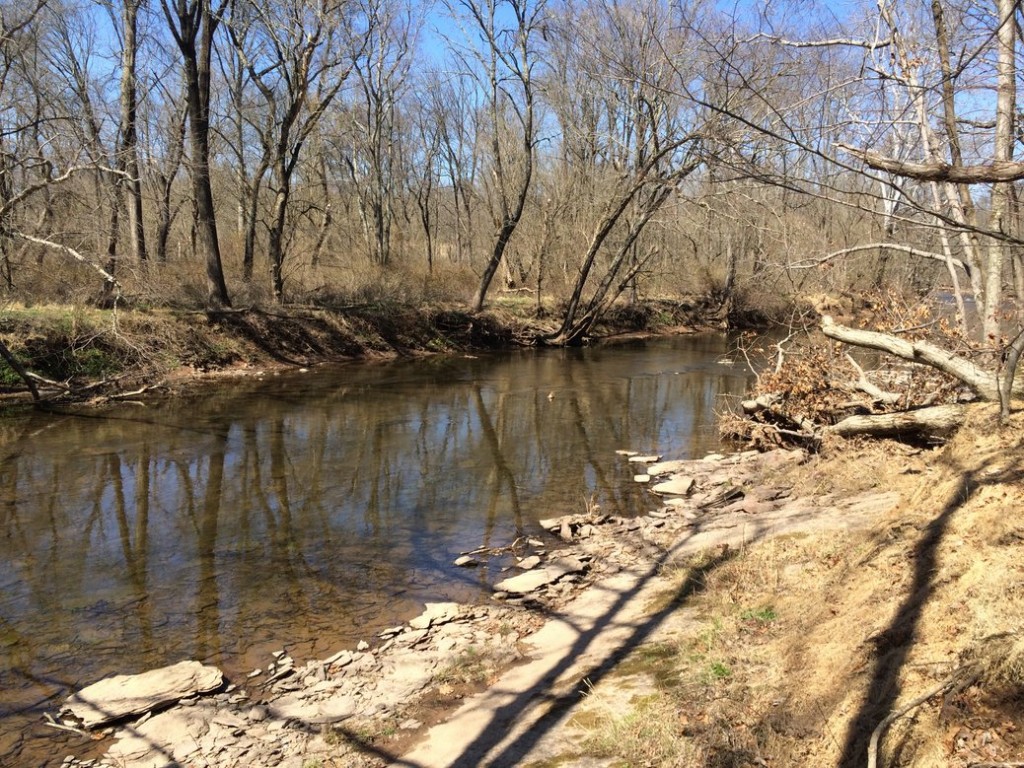 However, if checking out the corporate headquarters of one of the most powerful educational institutions in the world doesn’t interest you, the back trail, frankly, isn’t as pretty as the walk along the stream, and it also gets muddy when the weather is wet.  So another option is to treat LCT as a linear hike, and double back when the trail starts to climb away from Stony Brook*.  This is slightly shorter, and encourages you to tackle the Ettl Farm Trail, which again you can walk as a linear trail along the stream, or as a loop.  Only ambitious hikers will want to walk both full loops on the same hike. 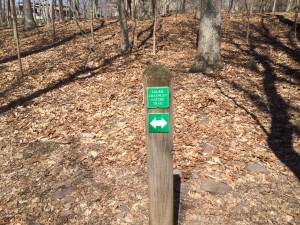 LCT is generally well marked, except when it cuts across the ETS parking lot. For most of the trail, resist the temptation to take any side trails and simply follow the signage. When you hit the parking lot, you just need to walk more or less straight, cutting across roads, past the flag pole, and to the woods road you see on the far side of ETS Drive. Definitely bring the trail map with you! 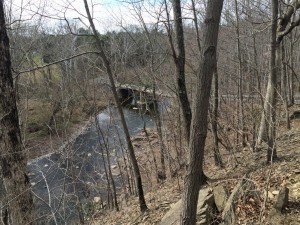 The Ettl Farm Trail starts at the bridge over Stony Brook (which has recently been rebuilt as a pedestrian/cycling bridge).  It’s one of the most spectacular points along the stream.  Even if you don’t want to extend the hike along EFT, it’s worth checking out the view!  To get there, just follow Province Line Rd on foot, past the barriers.

The trail itself is similar to LCT, though not well marked. Still, much of the trail is edged by rocks, so it’s relatively easy to follow.  The stream here has a slightly higher gradient and a little more structure, so is, if anything, more beautiful than along LCT.  When the leaves are down, however, you’re much more aware that you’re surrounded by McMansions, 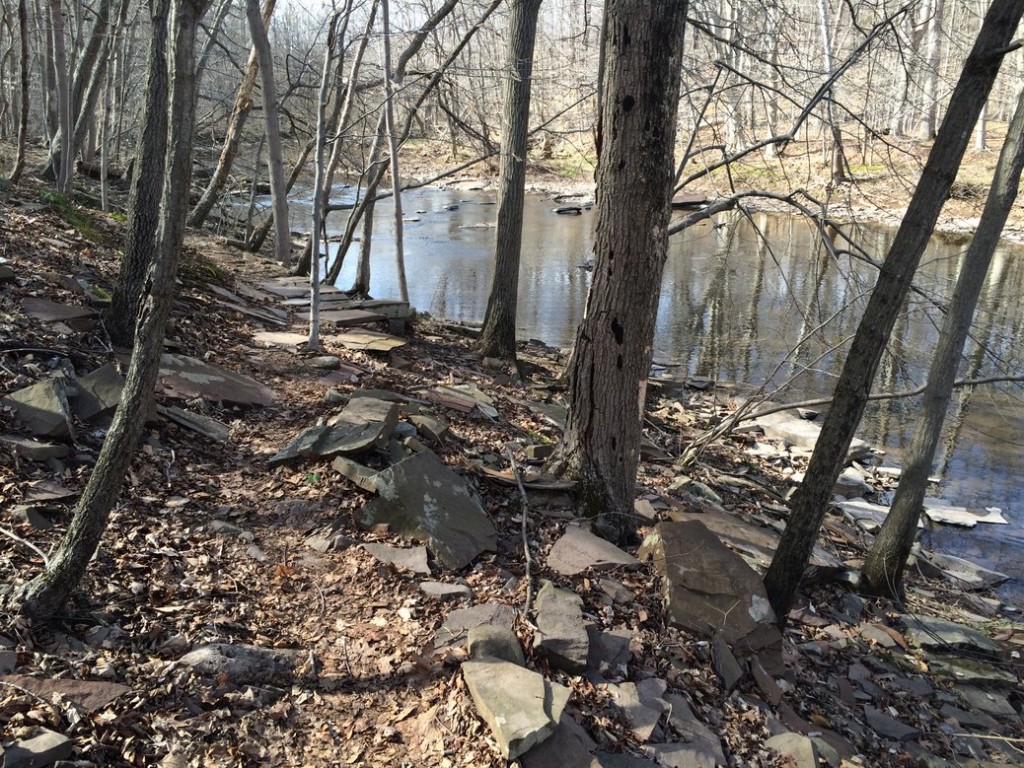 The trail stays close to the bank for most of the way.  After it swings south, the trail begins to undulate and the path becomes more rocky and requires a little more concentration.

The return loop via the Ettl Farm development is pretty dreary.  But it’s much quicker and easier once you climb out of the ravine than returning along Stony Brook.  The path up isn’t blazed, and doesn’t get a lot traffic, so it’s easy to miss.  I did see the rock-lined path when I walked by, but didn’t realize it was the return loop until I hit the Gas Pipeline right of way.  If you do the same thing, just double back until you see the path on your left.  It’s pretty easy to follow  and takes you back to the pipeline right of way above the ravine, where it’s mowed (you could also bushwhack up the gas pipeline from the stream, but the tall grass is likely to be tick-infested).  Walk straight back along the right of way to cross the street in front of you, picking up the paved path on the other side.   From there, you’ll definitely want the trail map in order to navigate back to your car.

__________________________
*Note:  the LCT trail follows Stony Brook closely for a while, then edges away for a  few hundred yards to avoid some private property, and then parallels the stream closely again.  The second stretch is some of the prettiest sections of the stream, so don’t turn back prematurely.