Dedicated Hidden Trenton readers have known for years about our enthusiasm for Papa’s Tomato Pies, a Chambersburg icon that recently joined the Italian flight to the suburbs (you can now find them in Robbinsville, NJ). Papa’s is widely regarded as the United States’ oldest pizza restaurant in continuous operation by the same family. We rave about their traditional tomato pies–a thin crust with a layer of crushed tomatoes, capped with cheese then olive oil, and some simple but scrumptious toppings. How can such humble (and common) ingredients transform into something so perfect?  Nick, the owner (and grandson of the founder), has yet to reveal all of his secrets. But clearly one of them was his son, Dominic, who was cooking the lunchtime rush (and prepping the evening dough) every single day at Papa’s.

Now that Nick has moved the original Papa’s out of town, his son has finally left the nest. Much like the owners of the divergent branches of the famed DeLorenzo’s Tomato Pies establishments, Dom has finally founded his own independent branch of Papa’s Tomato Pies. And he’s picked a most unusual location–inside the cafe and food court of a Risoldi’s supermarket.

Yes, the location is bizarre.  But oh, the pies! Shattering, flavorful crust and fresh toppings. Selected as one of only 4 finalists in Hidden’s Trenton’s 2015-16 Tomato Pie competition (click on banner to see more).

We delighted at the garlic and onion tomato pie, and thrilled to enjoy the flavorful and rich sausage and mushroom. Dominic says that he orders from all the same suppliers as his father did in the Trenton location, and a single bite confirms. We tried to compare these tomato pies to the original, and our opinions were divided. Some felt it was utterly identical, others sensed nearly imperceptible differences, perhaps a missing seasoning or a difference in ovens. The only way to know with certainty would be to get a pie from Papa’s (Robbinsville) and Papa’s (Risoldi’s supermarket) and compare side-by-side–but putting either of these pies in a box would be a sin. They’re meant to be devoured straight out of the oven, even if it means crowding around a cafe table while watching grocery shoppers pick out their produce and listening to the caustic sounds of supermarket announcements (“cleanup in aisle 3”).

Dominic’s simple menu mirrors his father’s (and at his father’s original prices, which means that the pies here are $1 cheaper than in Robbinsville). It is $12 for a small pie (14 inch) and $13 for a large (16 inch). There is, of course, absolutely no reason to get the small. Toppings are $1 for the basics (garlic, peppers, onions, extra tomatoes) and $2 for everything else (pepperoni, sausage, meatball, mushrooms, mustard, hot peppers, anchovies, black olives, broccoli w/ ricotta, spinach w/ ricotta, and extra cheese). You read that right, mustard as a topping. Papa’s was famous for their “mustard pies,” with mustard smeared onto the raw pizza dough before baking, and we adored their piquant bite–you can find them here as well (be warned, not everyone loves this combination). Unlike his father, Dominic offers slices ($2 for plain, $2.25 with toppings) but we’d strongly recommend you stick with the full pie, which will ensure your pizza is fresh out of the oven. There’s nothing else you can order from Dom, but since you’re in a supermarket with a large cafe/food court, you have plenty of other options (salad bar, hot foods, deli sandwiches, etc). You pay for everything at the checkout line. The place is BYOB (it took a while for Dominic to find his corkscrew–apparently most customers don’t bring their own bottle of pinot noir to the grocery store…), but you’ll be drinking out of soda cups unless you bring your own wine glasses.  He also offers free delivery, though we aren’t sure what the delivery range is. 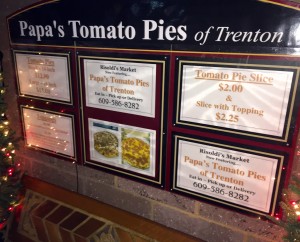 Don’t be fooled by the Trenton street address–this is technically Hamilton (but it’s a quick drive). The shopping center, which also hosts Myilai Masala, our favorite local Indian restaurant, is quickly becoming a foodie destination. It’s a good thing that they also have a gym, as you’ll need it to work off all this tomato pie.

If you’re looking for somewhere to take a date (or, you know, your parents) then this isn’t the tomato pie establishment for you. Click here for all of our pizza reviews; I’m particularly fond of La Villa which is right over the Trenton Makes bridge in Morrisville. But if you miss the original Papa’s and want to relive that experience just a short drive from Trenton (or if you’re just desperate to get some grocery shopping done), then you’ll find yourself crowded around hot tomato pie in the middle of a supermarket cafe.  And you’ll thank us for telling you about it.