Dominick’s is the pizza joint you pass (if your driving habits are anything like mine) on 29N heading towards Lambertville, just on the Trenton side of the border with Ewing.  It’s not much to look at from the outside, and not much on the inside either.  But the pizza is good, including a pretty mean Trenton-style tomato pie, as well as more conventional Sicilian and Neopolitan-style pizza. 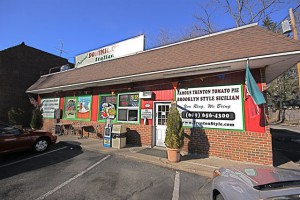 With so much great tomato pie in Trenton, why does Dominick’s deserve a place on Hidden Trenton?  A few reasons.

First, the pies are genuinely good, made with fresh ingredients.  While the tomato pie doesn’t quite match the sublime heights of Papa’s or DeLorenzo’s, it’s darn good.

Second, it’s open when those other places aren’t.  Want a pie for a Tuesday lunch?  You’re out of luck with either of the classic Trenton establishments, which are basically open only for dinner.  Also, while Papa’s is nominally open until 9, it often shuts down on a weekday by around 8:30, whereas Dominick’s is reliably open until 10.

Third, if you’re looking for a vegetarian pie, Dominick’s offers a lot more, and more interesting, vegetarian toppings than just about any place in town.  This includes not only conventional toppings such as onions, fresh mushrooms, spinach, and green peppers, but also “gourmet” toppings such as artichoke hearts, eggplant, portabella mushrooms, roasted peppers, roasted garlic, and fresh mozzarella. So if you’re vegetarian, or are serving veggie friends, or are just looking for a break from a boring pepperoni pie, Dominick’s may be the place.