Special notes for parents
Like most streams in the area, Stony Brook is generally low and slow moving in spring and late summer. So wear water shoes and plan on wading. It can flood after a significant rain storm, however, even in high summer, so be careful. If you get there and discover it’s flooded consider Witherspoon Woods as a nearby alternative.

BTW, if memory serves there’s a nice playground at the trailhead (and another one at the school, which is at the northern end of the trail, n or Rosedale Ave), and a walk through a sculpture garden. So plenty to do in addition to the stream and the hike.

It took me 22 minutes to drive to the trailhead parking lot from Trenton.  Once on the trail, you’ll find yourself in a wild, tranquil world where everything seems to be right.  No small feat.

Stony Brook Pathway starts at a parking lot on Rosedale Road for Greenway Meadows Park.  It extends nearly a mile south of Rosedale Rd, and a quarter mile north, tracking Stony Brook most of the way, its flood plain preserving a swathe of undeveloped land through some of the most valuable real estate in New Jersey.  When the leaves are up on the trees, you’re barely aware of the suburban development that surrounds you. 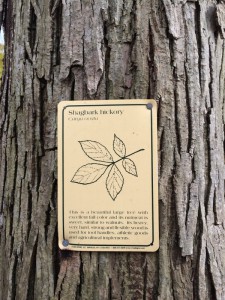 Really, the principal reminder that you’re in Princeton is the interpretive signs that someone has tacked up, identifying some of the larger and more exotic trees along the route.

We suggest starting by walking south, which gives you the option of continuing north at the end of the hike if you want a longer walk, or returning directly to the parking lot.   Follow the asphalt path above the parking towards the stream, cross the paved path that parallels the fence-line, and make a left on the dirt path along the stream to head south on the Stony Brook Trail. The trail itself is pretty much dead flat, clearly marked, and (except for the occasional root sticking up) provides easy footing.  Wherever there is any kind of obstacle, and there aren’t many, there’s a helpful bridge or handhold.  The trail does get muddy in places during wet season.

A handsome steel bridge near the southern end of the path allows you to cross Stony Brook.  From here the path diverges from the stream, and runs along the fence-line for the extremely posh Jasna Polana golf course.  Here there’s a mild gradient until you reach 206.  At this point, most folks will just turn around to return the way they came.  Altogether, out and return, the walk is just under 2 miles*.

If you’re interested in history, before turning around, you can walk about a quarter of a mile east (left) along 206 to the stone bridge.  This is the original colonial structure on what was the main overland route from Princeton (and NYC) to Trenton and Philly.  On January 3, 1777, the vanguard of Washington’s Army (which had marched overnight along the Quaker Road from Trenton) was advancing up Stony Brook ravine, intending to stage a surprise diversion on this main road, while the bulk of the Continental Army attacked the British Garrison from behind.  Instead they ran into a company of British Infantry here, and the Battle of Princeton took place on the Clarke Farm, about half a mile SE.  This British infantry company was facing the entire Continental Army, and were eventually overwhelmed, survivors escaping up the Stony Brook drainage (the same direction you’ll be walking back to your car).

This path is is lovely for everyone, but particularly suited to Beginner hikers and for excursions with young kids.  The stream is generally fairly shallow, the current isn’t swift, and the bottom is reasonably firm, making it a good place to explore aquatic life.  If you bring a rod, the best fishin’ holes are the pools on either side of the Rosedale Rd. bridge.  This is stocked with brook trout in the early spring, where there’s always a crowd of folks on opening day.  The crowds usually disappears after opening weekend (I don’t believe there’s any restocking), but there’s a self sustaining population of sunfish, bass, and a few carp that can be caught in warm (not hot) weather.

*Note, you can extend the walk another half mile round-trip along Stony Brook by passing the parking lot on your return, continuing North, and crossing Rosedale Rd.  The trail stays along Stony Brook as far as Johnson Park School.

Click for ALL reviews in these related categories:
Activities | Fishing | Hiking/Walking | Kids