Updated March 2018.  Trentini’s Restaurant has been quietly serving good Italian fare at its storefront in the Roebling Market ever since its founding in 2002. Trentini’s looks like a standard pizza joint (and the pizza’s OK). 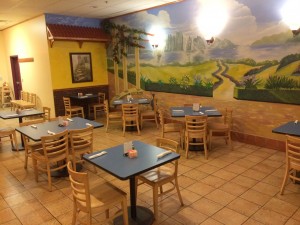 But walk past the pizza parlor into the back room, and you find yourself in a quiet, immaculately clean, and intimate dining room with waitress service.

When I first ate at Trentini’s, not long after it opened, it was one of a dozen or so Italian joints in Chambersburg, and I felt no strong compulsion to review it for Hidden Trenton.  After that, I never thought about it much, though I’d eat a meal at Trentini’s a few times every year and always enjoyed them.

Fast forward to the Trenton of NOW.  All of the old-line, Trenton Italian eateries are gone.  So, this little Italo-Hispanic joint, Trentini’s, is the last Italian restaurant in Chambersburg.

Just how good was driven home to me recently when my wife and I ate dinner at an Italian joint in Lawrenceville that came highly recommended by a Princeton friend. The restaurant was quite charming (small, cozy, intimate). A 70-something Italian gentlemen was playing the accordion, serenading diners. But the food was searingly mediocre. And a basic chicken entree was twice what you pay at Trentini’s. 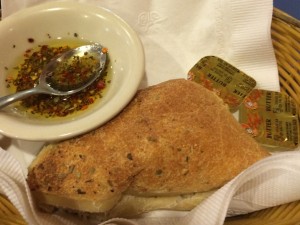 I said to my wife, “Trentini’s food is better!” And so it is.  Much better, as my last visit to Trentini’s, two days later, confirmed.  But at Trentini’s a basic chicken entree is $11.95, and more elaborate preparations are a buck or two more!!!

For that price, you’ll get an ample portion of chicken, a side order of pasta, plus a side salad, and home baked bread (which comes out of the pizza oven, and is warm and chewy). If you like to eat healthy, swap the pasta for a side of fresh, sauteed spinach, for only $2 more.  It’s a great deal, for 30% to 50% less than you’ll pay in ROWOT (rest of world outside of Trenton). There is an extensive seafood menu in addition to the chicken.  And a fair number of vegetarian options (mostly pastas and side dishes).  Selection for vegans is pretty limited, so we rate it veggie friendly, not vegan friendly.  There’s also a small Latino menu (with the emphasis on Central American food), but it’s not nearly as extensive as the Italian selections, and frankly not as good as you’ll find elsewhere.

The decor isn’t quite up to that L’ville joint (though it’s charming enough that we rate it 2-chairs, though in truth that’s a bit of a stretch).  There’s a small TV screen (required in all Latino restaurants these days) on a side wall, but I’ve never had a problem turning it off when I’ve wanted to. 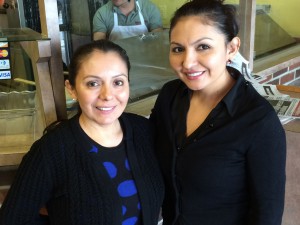 The reality is that if you go to ANY Italian restaurant in Mercer County, the kitchen staff is almost entirely Latino, and most live in Trenton. By eating at Trentini’s, you’re simply getting it closer to the source.  Trentini’s founding chef was Ecuadoran, and had worked in one of the famous Chambersburg eateries before it left town and he decided to open his own restaurant. He has since passed away, and the restaurant is now managed by his widow and her sister: Mirian and Jamie. They do a great job.  And they consistently deliver great food at bargain prices.

One thought on “All Quiet on the Italo-Hispanic Front”