For the most part, Chinese restaurants in Trenton and immediate neighbors are pretty dreary. They serve standard “Szechuan” menus, that are really American adaptations of Chinese cooking, often bearing little resemblance to the original. From the outside, Szechuan House looks like a pretty standard suburban Chinese restauarant, and at first glance, so does the menu. All of the standard Americanized items like Wonton Soup, General Tso’s Chicken and Chicken with Cashews can be found. 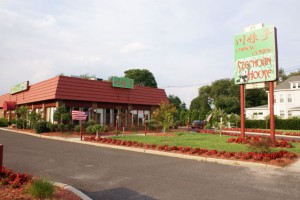 But look a little closer, and you’ll see a number of items that you never see on a “standard ” menu. Some frankly, sound pretty disgusting: Julienne Jellyfish, Pork Stomach with Chinese Pickle Soup, Sea Cucumber, Fish Head soup. But my rule is that if you don’t find at least a half dozen things that sound disgusting on a Chinese menu, you’re going to the wrong restaurant.

As it turns out, there’s plenty on the menu that’s both authentic and delicious.

At $18.95, the “Tea Smoke Duck” is reasonably priced, and delicious: it’s a whole, smoked duck, chopped into segments. There’s a number of great seafood dishes, including a Fresh Squid dish with Chinese Celery that’s artfully prepared. And many exotic sounding Szechuan delicacies, a few of which I’ve tried, and a bunch of which I can’t wait to sample.  If you’re in the mood for something truly exotic, ask your host if there are any specials not on the menu.  For example, they intermittently serve Frog.

The owners are gracious hosts…even funny; the service is attentive and the decor is perfectly pleasant. While you can take out, there’s no reason not to eat in. It’s BYOB.

Word is that the restaurant is filled with Chinese families on the weekends, complete with children running around and making noise. Anglos are advised to come during the week.

Szechuan House is one of a handful of restaurants we rate 5-hearts (gravitas).

Leave a Reply to The MillMan Cancel reply