Special notes for parents
This trail system gets surprisingly little use, probably because parts of it get muddy at times. Still, it provides the most elevation change you’ll find in Princeton, and nice payoffs for kids from “Tent Rock” and “Council Rock”. Trails at that end of the park get overgrown in spring and during a wet summer, so you’ll want everyone to wear long pants to protect legs from stinging nettles, poison ivy, and thorn bushes that become unavoidable. There’s also a nice section where the trail runs through a series of streams cascading down. My son loved this area when he was young.

The Woodfield Reservation is an off-the-beaten track preserve in north-western Princeton.  It provides just under two miles of woodland hiking trails, with the greatest elevation change you’ll find within the town limits (about 100 feet), and two geologic features that kids love.  The trails are laid out in two intersecting loops that cross a series of small brooks which flow during the wet season, adding charm to what is a lovely trail at any time.  Note that the trails do get muddy in places, especially in the spring, and because they get relatively little use, can be narrow and brushy.  That, combined with poor signage, is why we rate this hike Intermediate. 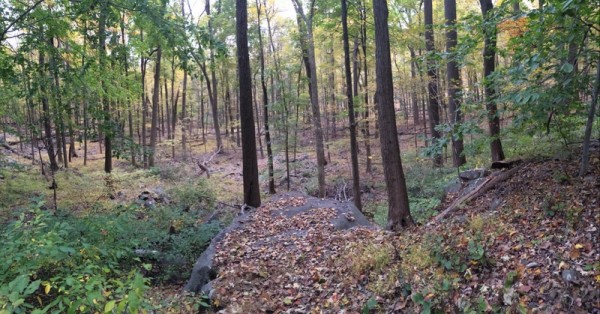 The two geologic features are called Council Rock and Tent rock (and are marked on the trail map).  Council Rock is the leaf covered dark rock in the bottom center of the image above.  It’s a little hard to see (easier if you click to enlarge the image), but it provides a flat platform that juts out from a ledge, overlooking (by perhaps 20 feet) a natural amphitheater.  Local, oral tradition holds that Lenni-Lenape Indian councils would assemble here, with speakers using this rock as a stage.  I have no idea whether this is true (though kids seem to find the story fascinating and completely credible), but I did once spy a fox trotting across this plain, its bushy red tail streaming behind. 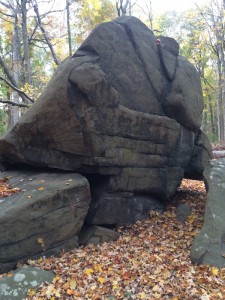 Tent Rock is shown in the image to the right.  It’s about 10 feet high, and the multiple layers and cracks provide wonderful hand and footholds for climbing.  When my son was growing up, this was one of his favorite places, especially if we brought a friend so they could climb tent rock together.

I find myself returning to Woodfield Reservation as an adult because of its convenience.  If I’m in Princeton, say for a late-afternoon meeting, I can sneak in a 45 minute walk before heading home.  Along with Witherspoon Woods, it’s one of the nicest trails in Princeton.  Note that if you’re on an ambitious Princeton hiking jag, you can connect this hike to Witherspoon Woods via the PDS and Stuart Trails which are marked on the map, and cross only one paved road.  You’re then in the Mountain Lakes complex, with several additional miles of trails, all of which are suited to Beginner to Intermediate hikers.

As mentioned above, the trails get relatively little use and do become overgrown, especially in late Spring and early Summer.  You’ll want to wear long pants.  Signage is only fair, and some of the trails have been relocated (while old blazes haven’t been fully erased) making it occasionally confusing about where to go.  Absolute beginners should probably stay away, though kids seem to enjoy the adventure of the rarely-trod path.