Special notes for parents
This is a lovely trail with kids. Easy to walk and interesting. The Devil’s Den and other boulder formations are withing a few hundred yards of the trail head, so you can make this a very short hike with young kids, if you want. All but the youngest children should be able to walk this entire route, gaining experience for more difficult hikes later.

When I first moved to Mercer County, the Mountain Lakes Preserve was a 5 minute drive from our house, and my wife, our 7 year old son, and I would often go out for a nice stroll in the woods.  It was pleasant, but not something a Trenton resident would want to drive half an hour to experience.

In recent years, Princeton has gotten serious about preserving open space.  At some point after we moved to Trenton and stopped paying attention, Princeton added Witherspoon Woods to its park system and trail network (yellow trails in the aerial image).  It’s only 40 acres, but it adds charming terrain and a slightly more challenging way to access the Mountain Lakes Preserve (magenta trails).  I stumbled upon it by accident and fell in love with it.  Connected to the Mountain Lakes trail system, and especially the Coventry Farm view trail (another new addition – cyan trail) it’s worth checking out, especially if you want to do other things in Princeton.  Click on the aerial photo to enlarge.  You can also download a KMZ you can load into Google Earth or Google Maps, as well as download a conventional trail map.

You can park for free either at the main Mountain Lakes parking lot, or on Cherry Hill Road.  I would strongly urge you to use the latter: it’s smaller and much more interesting.  Just look for the discrete, white park sign marking the driveway on your left as you approach from 206.

The terrain here is gently rolling.  Really, it’s a very easy hike except for the fact that the Witherspoon Woods trails are rocky, making footing occasionally difficult, and drainage is poor, so it can be muddy in the wet seasons.  Even with these concerns, I still rate this trail as suitable for beginners (though you’re warned).  In addition, there’s enough elevation shift to make the terrain interesting and provide a little extra aerobic value.

Witherspoon Woods is tucked-in next to the so-called “Princeton Preserve”, an exclusive development.  The dumpy houses you see go for $700K and up; the nicer ones are $3.5 million or so.  Do you think that guy cares whether someone from Trenton is walking along a trail with a view of his back yard?  Probably he’s not too thrilled, but those liberal so and so’s who vote in Princeton made this public land.  I figure it’s our duty as card-carrying members of the other 98% to make use of their generosity.  Noblesse oblige survives in Princeton.

Feel free to explore the whole park, but if you want a route that will take you 90 minuts or so,  you’ll start at the Cherry Hill Rd parking lot and turn right when the short spur trail hits the loop.  Go right almost immediately to check out the Devil’s Cavern (less dramatic than the name suggests, but still interesting) and stay left then right to get back onto the loop.  Follow that until you hit a trail signposted for Stuart School (turn right).  It’s worth following that trail all the way to the school, following the stream bed.  You’ll then need to double back towards mountain lakes, and follow the trail along the fence line to check out Coventry Farm (magenta line in photo).

When that trail ends, stay left towards Palmer Lake and follow the trail along the bluffs on the western shore (this has more elevation change, and is prettier than the eastern shore).  Loop around the northern end of Palmer Lake and by all means stop at the Mountain Lakes House if it’s open (it usually isn’t unless there’s a special event).  Then head north from the house to pick up the trails back to Witherspoon woods, eventually turning right at the trail marked “Witherspoon Woods Loop”.  This is the southern part of the loop  Follow it around until you come to the Cherry Hill Rd. spur trail on your right: follow it back out to the parking lot. 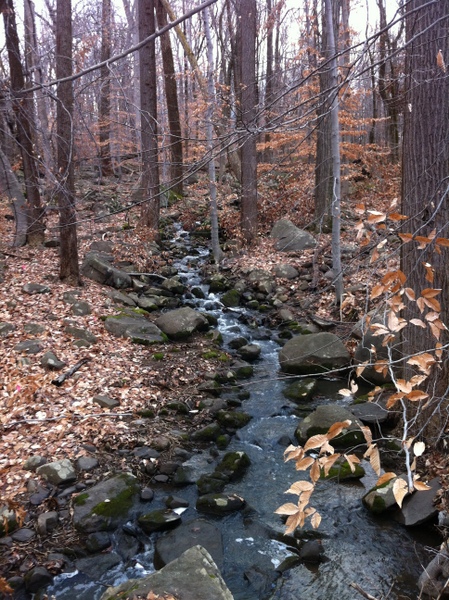