Saluté is a pleasant, relatively small (60 seat) Italian restaurant in a nondescript strip mall in Morrisville.  The aesthetic and menu are very much like a Chambersburg eatery from the 60s, though newly renovated.  Faux stone panels and crystal light fixtures evoke a “rat pack” bachelor pad, as does the 1960’s-era cool jazz emanating from the audio system, and a massive enlargement hanging from the back wall of the owner dressed in a dark suit and wrap-around sunglasses.   The signature dish is Veal Sinatra (or Chicken Sinatra on the lunch menu):  a dish originally developed by Vincenzo’s Italian Restaurant in Louisville to honor a visit by Ol’ Blue Eyes (see header image).  It’s a boneless cutlet pounded thin, breaded, fried, topped with spinach, ricotta and mozarella cheese, and a creamy marinara sauce.  For Saluté’s owner, Vincenzo Severino, it must have been a no-brainer to serve it.

There’s nothing adventurous about the menu, but the food is consistently well prepared. 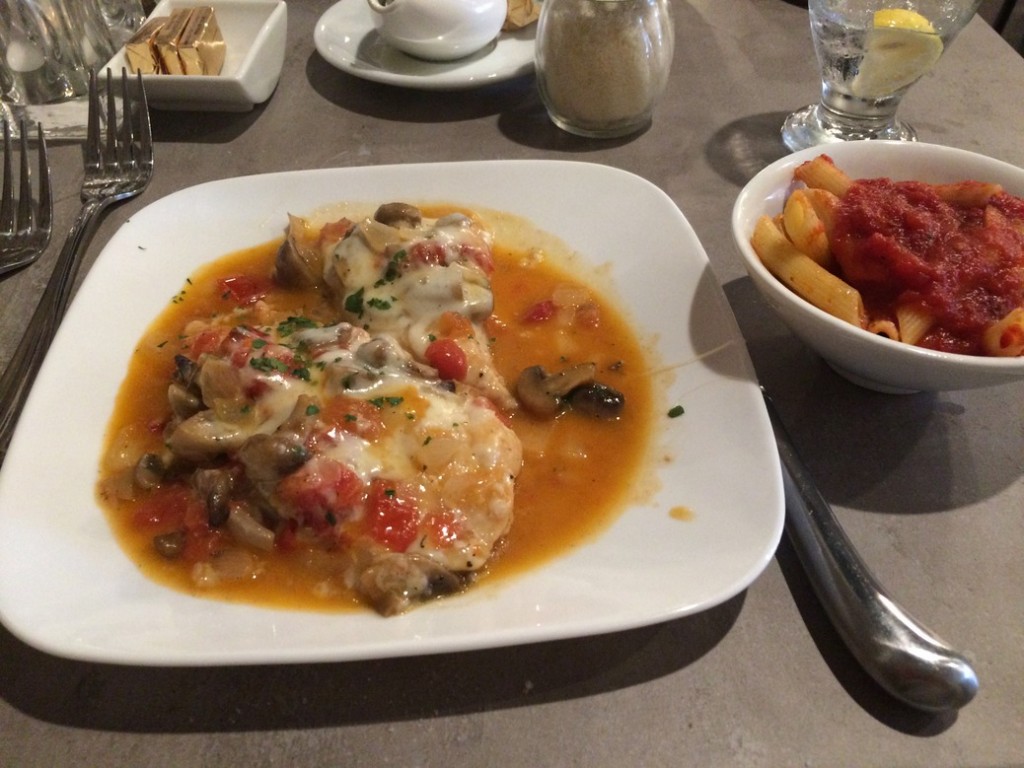 For example, check out this Chicken Palermo: boneless chicken topped with mushrooms and tomatoes, in a white wine sauce redolent of caramelized onions and garlic… truly delicious.  Only the fact that the chicken was slightly overcooked (and therefore tough) kept it from being superb.  BTW, the marinara sauce on the pasta is excellent: an intense tomato reduction.

The restaurant is reasonable for lunch, where you can get sandwiches or a subset of the dinner entrees.  Sandwiches (in September 2015) range from $8.99 to $10.99, while chicken entrees range from $12.99 to 14.99 and come with soup or salad and a side of pasta.  The portions are generous but not enormous.

For dinner, prices go up: chicken entrees are $18.99, and the same preparations for veal are $24.95.  Seafood entrees are $25.99 to $31.99, and the most expensive entree on the menu is a rack of lamb for $35.99.  We’ve rated the restaurant $$, which it certainly is for lunch.  However, if you order one of the more expensive entrees, and especially if you add an appetizer, you’re into $$$ range pretty quickly.  The restaurant is BYOB, which will help keep your check within reason.